Children who behave well at the table in one Italian restaurant will not only save their parents’ nerves but also money.

Restaurateur Antonio Ferrari, who runs a wine bar and restaurant bearing his name in Padua, Italy, is giving a 5% discount for families whose kids stay mild-mannered during their meal at his place. The “polite children discount,” which was rolled out six months ago, came as a response to rowdy children and parents who let their kids be, reports the Times of London.

“I have seen five-year-olds put their feet on the table and four-year-olds jumping from chair to chair, while parents do nothing,” Ferrari told the Times. His attempts to intervene would even be met with resistance from parents, who told him “[their] children can do what they want.”

The Times says that Ferrari started noticing this when he expanded hours to Sunday afternoons, the likeliest time of day for whole families to have meals outside.

The chef’s incentives haven’t exactly inspired a lot of good behavior or parenting. Ferrari has so far only given the discount three times since its introduction, telling the Times that this “shows how rare good behavior is” around the table these days.

He most recently doled out the reward last Sunday to two couples who brought with them six kids, ranging from 4 to 6 in age, who “just chatted” throughout the evening, according to the restauranteur.

“We saw them coming through the door and expected hell,” Ferrari told the Times. “But they were perfect.”

‘Global News’ – Should parents be rewarded for bringing well-behaved kids to a restaurant? 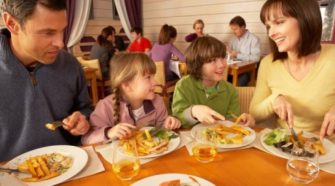