Inevitably, there are scenarios in which the sight of a child will cause adults to groan (hopefully) internally. Airplanes, for one. And for many, restaurants.

The trope of a nightmare child running amok among tables and chairs, knocking over drinks or causing servers to drop trays, has been played over and over again on television and in movies. But like any other cliché, it comes from a place of truth.

That’s why a restaurant owner in Padua, Italy, recently rewarded a large group of people with a five per cent discount for their well-behaved children.

Antonio Ferrari, owner of Storie di Cibo e di Vino wine bar, took a snapshot of the bill before presenting it to the group, highlighted the line item that read (trans) “discount for well-behaved children,” and posted it to his Facebook page with the caption, “It’s just so unusual!”

In an interview with Italy’s Corriere della Sera newspaper, Ferrari said, “I got the idea from a restaurant in Miami that I visited a few months ago. I really liked the idea and on Sunday, I had a chance to put it in action.”

Ferrari said the group, which consisted of five adults and six children ranging in age from four to six, was so pleased with the discount that they left a €30 (C$42) tip.

“We get a lot of families in the restaurant on Sundays and it can happen that the kids will lock themselves in the bathroom and play with the water or will run around the tables,” he said. “I just thought it was such a beautiful scene to see how [these children] were interacting among themselves with such composure.”

Ferrari says that he will make a habit of offering the discount going forward. But before we chalk this up to cultural differences in child rearing, there have been instances in Canada where parents of docile kids have been rewarded. In 2014, Carino Bistro in Calgary received an outpouring of attention when someone posted a copy of a bill to Reddit. It showed a $5 discount next to a line item that read, “Well Behaved Kids.”

Some experts argue that this is a dangerous move, however.

“If a restaurant owner wants to make a gesture to patrons, like offering a couple a bottle of champagne if they’re celebrating their anniversary or free ice cream to kids who have been well behaved, that’s one thing,” says Alyson Schafer, parenting expert and author of Honey, I Wrecked the Kids.

“But if there’s a line item with a discount, that tells you that there’s a policy in place and someone needs to make a judgment to offer that discount. It becomes problematic.”

Schafer places the onus of keeping kids in line in a public place on the parents, but also points out that children do not inherently understand the laws of social conduct, so outsiders shouldn’t be quick to judge. Her advice to parents is to ease the kids into it in stages.

“The job of parents is to train children to have the skills needed to participate in greater society; but it takes time,” she says. “Start out by taking them to a place like Chuck E. Cheese’s, where it’s loud and all the kids will be manic. Then move your way up to a family restaurant like Swiss Chalet. Each time, you’ll have an opportunity to be an effective disciplinarian.”

She also says not to wait for a special occasion like a birthday or Mother’s Day to take your kids out to a restaurant, because you’ll be more invested in staying and less likely to take disciplinary action like taking a screaming kid to the car to settle down, or leaving altogether.

As for the no-kids policies that are popping up more frequently lately in places like airplanes, she doesn’t see it as a positive.

“I would prefer to rely on parents to use common sense,” Schafer says. “And there’s a portion of them that won’t. But if I had to make an error in one direction, it would be to trust parents rather than put these policies in place. It’s too ‘Big Brother.’” 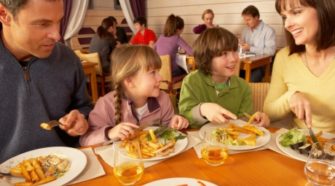