Latest
Sounds like a great time to brush up on those table manners.

It’s news that anybody who has had a wayward toddler spill their juice on a white tablecloth will probably cheer for: A restaurant called Antonio Ferrari in Padua, Italy, is getting international attention after the owner gave a five percent discount to diners whose children were polite. Antonio Ferrari, the owner and manager of his eponymous enoteca, a wine bar that also serves food, told The Local that the idea came about when he went to a bar in Miami with a similar policy, and he liked the way that it rewarded well-behaved kids instead of punishing badly-behaved ones (or, in some cases, their parents).

However, don’t start planning your summer holiday with the kids just yet. Ferrari told Italian newspaper Corriere della Sera that he’s not sure if the policy will be permanent or just something he gives out occasionally when he’s impressed by some particularly polite children. The first application of the discount was one he gave out to a family where the kids sat and colored quietly as their parents drank wine. A Corriere reporter shared a photo of the family’s receipt, which bore the phrase “sconto bimbi educati” (well-behaved children), on Twitter. The discount was for €13.05 ($13.79); five percent of the total bill.

When asked if the discount was a PR move, Ferrari said, “No, honestly, it was instinctive. It was just lovely to watch how they were interacting at the table, with such composure.” He admitted to The Local that the quiet, polite kids stood out since many of the children who come to his establishment aren’t quite so disciplined. “We don’t often get well-behaved children. When you get parents who are rude, the kids think they can do anything. They might climb on the tables with their shoes on, play in the bathroom and make a mess with the taps, or annoy the other customers.”

Still, Ferrari hopes that the spate of press he has gotten for rewarding well-behaved little diners will encourage parents to start their kids on restaurant etiquette early. “In Italy, we have a problem that people often feel judged, so I didn’t want to say anything—even positive—that might be seen as judging someone’s children or parenting,” he said. “I’d definitely offer the discount again, but I don’t want to make it an official promotion or offer because that’s not the point.”

‘Global News’ – Should parents be rewarded for bringing well-behaved kids to a restaurant? 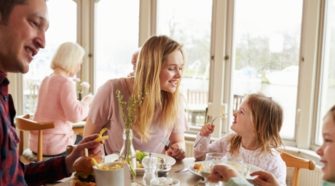